Kashan was famous for its brocades even in the Middle Ages, but the chronicles say nothing of its carpets. It is claimed that the pearl of the Victoria and Albert collection, the “Ardebil” carpet dated to 1539, should properly be classified as a Kashan, since it was made according to the inscription by one Makhsoud from Kashan. It is impossible, however, to point to any antique carpet that was demonstrably made in Kashan.

The first organized production of carpets in Kashan was started in the late 19th century by the famous weavers Mouchtashemi, Yakoutiel and Mullah Ismael, whose carpets attract higher prices in Persia than in the West. Since this time, Kashans have held a distinguished position on the world market. Their success has been due to three factors : the richly variable pattern and attractive colors : the soft, lustrous Merino wool that gives these carpets their velvety surface; and the masterly skill of the weavers engaged from nearby Isfahan. All this resulted in a cultivated oriental carpet, with a Western elegance.

The most important of the innumerable variations in pattern are as follows : 1. The classical pattern, with a long medallion and corner decoration. The field is rich in flowers, vines, arabesques and palmettes of the Shah Abbas type, but never symbols of any kind. 2. The prayer carpets with the “mihrab” or prayer niche, with Persian, Assyrian or Corinthian pillars supporting the arch, and a hanging lamp over the monochrome field. 3. A livelier version of the ancient vase pattern. The bouquets resemble a display of peacock feathers. 4. The illustrative carpets, the usual composition of which comprises a mass of small birds among flowers and branches. Least in demand are the over dimensioned figures, usually swarthy old men of dismal countenance.

The border is worth particular mention. It is always beautiful, whether purely ornamental, consisting of figures, or with inscriptions in cartouches. Inscriptions increase the value of carpet. Both the Merino wool and the local product, which is also used, are outstanding. The carpets woven from Merino wool are termed “Kurk Kashan” and attract a higher price. The dyes are first-class, even the synthetic ones. The majority of carpets have a warm red ground, the rest are indigo. Occasionally beige or some other color.

The silk carpets deserve a chapter to themselves. While the other towns, apart from Qum, have completely stopped making them, Kashan continues the tradition. “Part silk” carpets are also made. In these, part of the pattern is knotted in silk yarn to enhance the effect. Silk carpets incorporating gold or silver threads are rarities. Their closeness of weave is usually around 420 – 450 knots per sq in. The warp and weft threads of the “Normally” Kashans are of cotton. Persian knots.

No. of knots per inch. 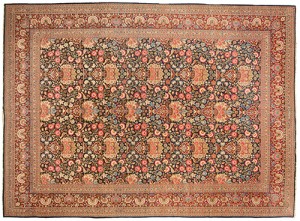 length breadth No. of knots per sq in